Fantastic Painting and Drawing Demo for Still Life I Found 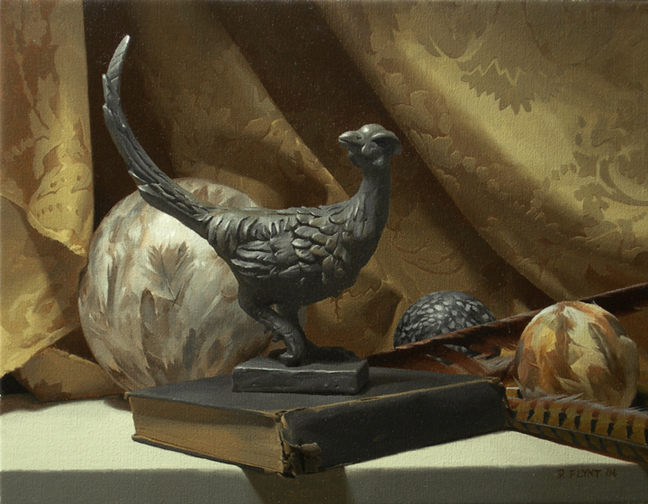 For this particular piece I followed virtually the shortest process of the different procedures I use while painting. 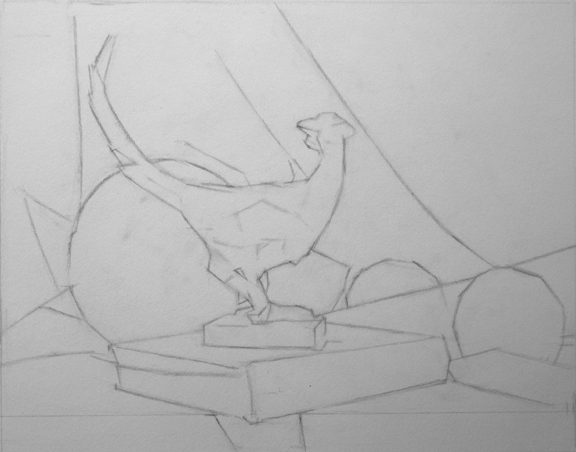 Drawing with graphite on paper or charcoal on linen.


For this piece I started on drawing paper using graphite and later transferred it to my linen. This is the way I usually start. Occasionally, I draw directly on the linen and when doing so I usually start with vine charcoal and then finish using charcoal pencils.


The first thing I do when starting a careful drawing is to set up a series of height relationships. Generally I place 8 or 9 carefully chosen tic marks. I derive these through a combination of subdivision (such as finding halfway points) and or establishing a unit of measure (similar to using a head length as a measuring unit). These marks are very important and I trust them to guide me through the rest of the drawing so they must be as accurate as possible. With them I can find widths and other parameters. These parameters establish proportion; a fundamental component in any accurate drawing.


Blocking-in seeing for shapes and tilts.


I then begin blocking in the objects using predominately straight lines (which are easier to relate and compare). I looked to see shapes and relate tilts. As I blocked-in these shapes I constantly took notice of how they aligned with one another both vertically and horizontally. 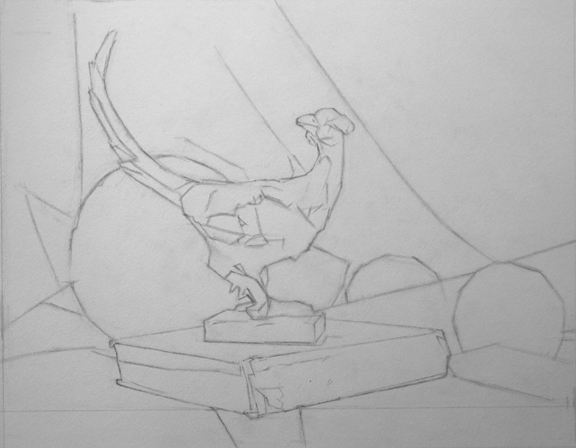 
In continuing the block-in I shifted to breaking down the larger shapes into smaller shapes. I continued to look at both the shapes and the tilts. I worked to break down and refine my most central object. At this point I was mainly thinking in terms of two-dimensional shapes, concerning myself not with the object I see but with the shapes and patterns I see. Three-dimensional thinking will come later. While drawing I was cycling through multiple checking systems to find the placement of points, lines and shapes for each decision I made. 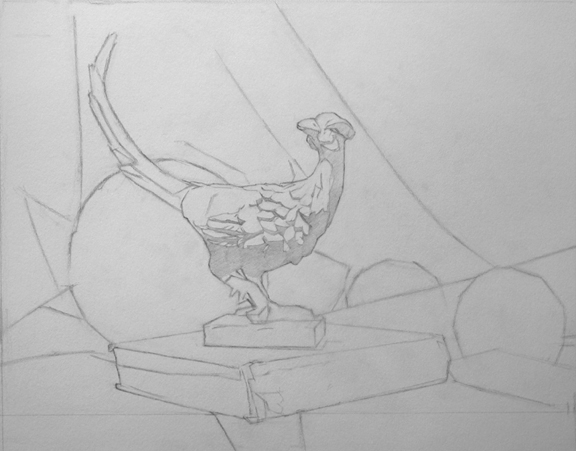 Point to point along the contour.


In this image I had begun to finish a section of my linear drawing. To finalize the contour I begin to move in a point to point way, looking to see the subtle shifts of the line. I was also moving my mind into a more three dimensional way of thinking. I was asking myself if the line made sense with the structure of the object


Finding forms on the interior and separating light from shadow.


On the interior I broke down the drawing finding as many different interior forms as I could. Although I was now thinking about the forms (three-dimensional thinking) I was still registering the shapes in a two-dimensional way. I then also lightly filled in the areas of shadow with a relatively flat tone. When separating "light" from "shadow" objects are seen in a more sculptural way. Additionally, it aids in making the image, with all of its linear shapes, less confusing to interpret 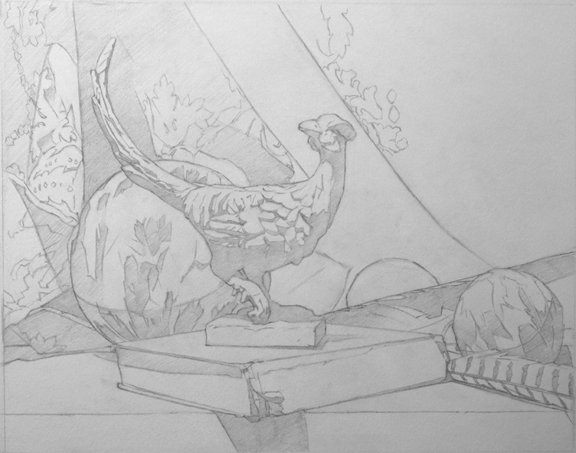 
In this image I had finished the linear drawing for all of the foreground objects and was midway through the background drapery. My tactics for drawing the background had shifted. I skipped the preliminary stages of blocking in shapes and then slowing breaking them down. I felt I had enough information to freehand the background, drawing the exact shapes that I saw. Because of this I begin to draw in the same way as when I finalized the contour of the foreground objects in a "point to point" fashion.


While finalizing the contour I was largely triangulating points and scanning plumb lines. However, as shapes were formed I would take note if they matched the shapes I saw. This is a faster way to draw but it is easy to loose track of the larger shapes and patterns if one is not careful. 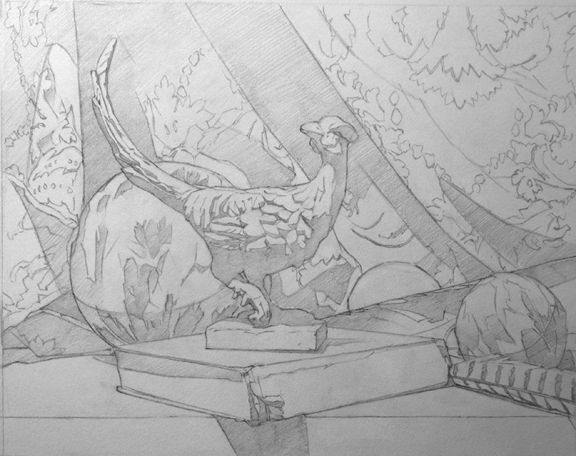 Categories of lines to look for.


This image is of the finished drawing. When teaching a question that often comes up is how much of a drawing is necessary. Although much of this comes down to experience, knowing how much information you personally need to carry on with the process, some guidelines are to look for lines that tell about structure, the light source and abrupt value or color changes. Keeping this in mind, three categories of lines I generally look for are: the contour, contours of overlapping forms, and the "Terminator*". Two secondary and more subjective categories are: abrupt plane changes and abrupt local value changes.

*also known as "Apelles' Line," the "Bedbug Line," and the "Core Shadow" 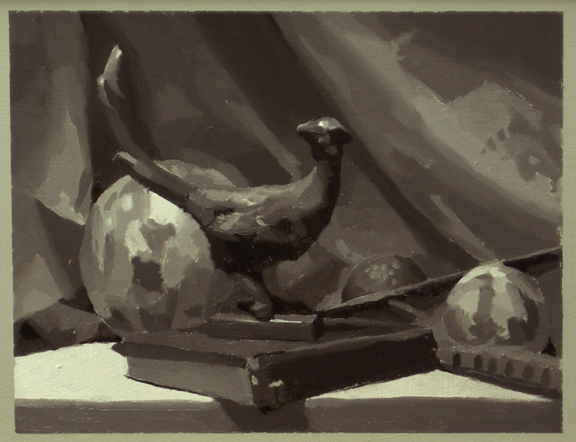 Function of the value study.


Before moving on to the actual painting I did a small (approximately quarter scale) monochrome value study. The purpose of the study was to better understand the larger value relationships of the setup. It was referred to throughout the actual painting in helping to guess the value of any given area. It was also a chance to make some slight alterations to the actual values that existed in the setup with the intent of enhancing the feel of the painting or composition. 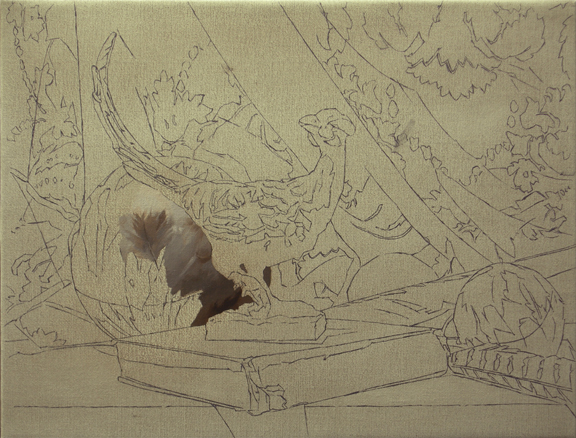 Painting (early stages and getting started)

Transferring and toning the Linen.


After transferring my drawing to the stretched linen using a charcoal transfer, I inked over the lines with "India" ink and then lightly toned the surface to achieve a fairly neutral, light in value, grey. Once this fully dried I moved on to the actual painting stage.


This type of painting may be referred to as "Form Painting" where one moves very carefully over the forms of the objects. Form painting in this way is very challenging. It is a finish as you go way of working. The challenge is similar to that of executing a refined line drawing with no block-in. It requires a high degree of concentration to not loose track of larger color and value relationships. This is the main reason I executed the value study before moving on to this stage. It is not for all temperaments and is not the way I always precede in a painting but almost always the way I finish refined areas of my paintings. 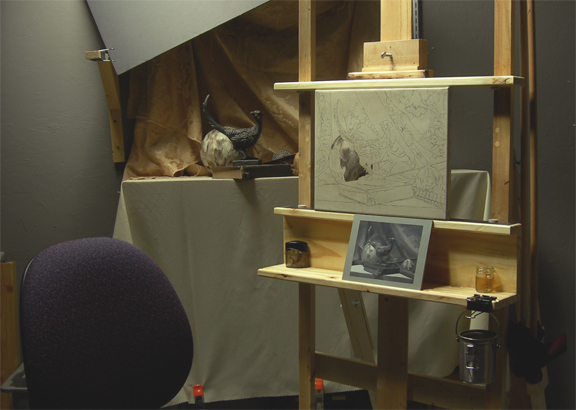 
This is a picture of the setup. As you can see the value study was close at hand. The jar of medium on the right hand side of the easel was a mixture of 25% stand oil and 75% turpenoid. However, I didn't use very much medium while painting. I mainly used it for oiling out sunken in spots to match the paint after it dried out 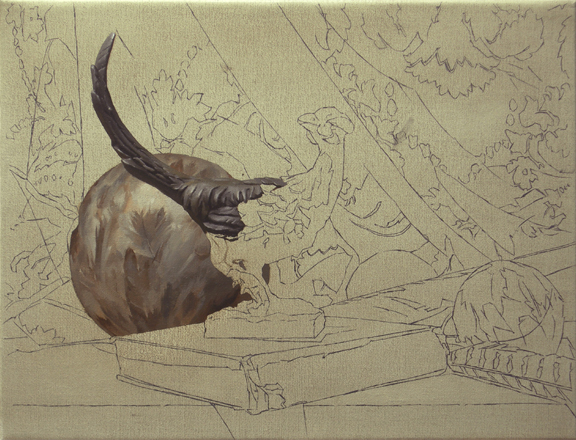 
This image shows the painting a bit further along. I picked this area to start because it had high contrast and a full range of values. This area (aided by the value study) would serve as the "key" to help me make decisions about values in other areas of the image. 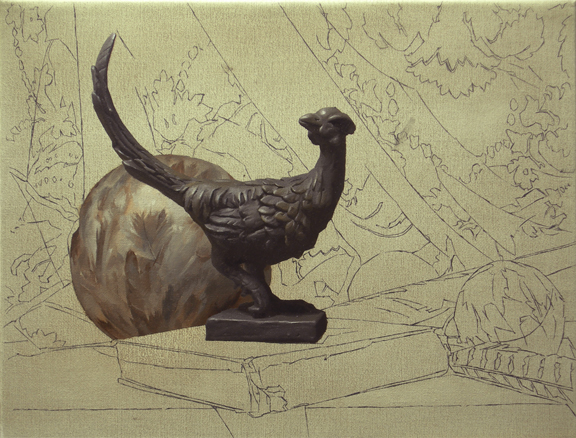 
Although I have been referring to "values" in this discussion so far, I should add that my decisions about value have not all been made by optical assessments alone. Even though I am aware of the values I see I also am guided by the direction of the light source to aid in understanding what I see and filter what I am seeing. 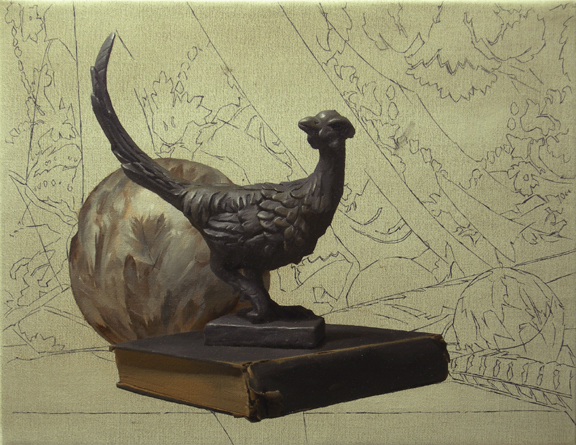 Gradations understood in both two and three-dimensional ways.


By knowing the direction of the light I can anticipate the orientation of the value gradations that I am seeing. In a purely optical and two-dimensional way these are the gradations that occur over a particular shape. In a conceptual and three-dimensional way these gradations explain the distribution of light over a form. This understanding of how the light works on different types of surfaces helps me in understanding what I see and aids in giving it organization and structure.


As I worked I made mental notes about how the light behaved differently on different surfaces. I often had to decide if the particular form I was work on was dominated by form light or by highlight. For each I conceptualized the light direction differently. 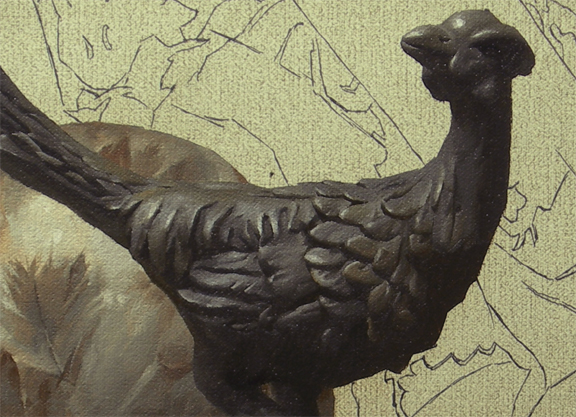 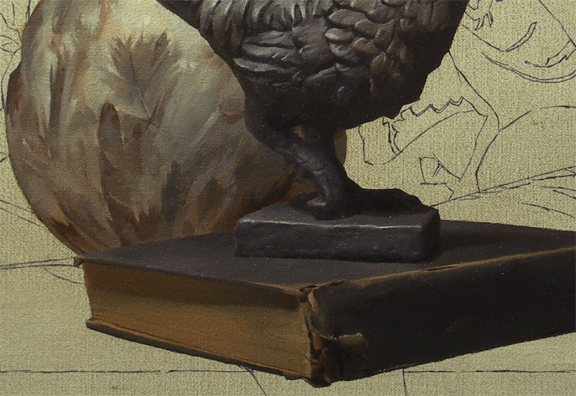 
In the above I was only able to touch on some of the many ideas that concern me during the execution of a painting. Yet, I hope for those of you who have an interest in the practice and science of painting it gives some insight into my approach