Art History Everybody Should Know:Annibale Carracci

ar.ca.di.an adj, often cap (1589) 1: idyllically pastoral; esp: idyllically innocent, simple, or untroubled 2 a: of or relating to Arcadia or the Arcadians b: of or relating to Arcadian Ar.ca.di.an n (1590) 1 often not cap: a person who lives a simple quiet life 2: a native or inhabitant of Arcadia 3: the dialect of ancient Greek used in Arcadia According to the Brittanica,
Modern Greek ARKADHÍA, mountainous region of the central Peloponnesus of ancient Greece. The pastoral character of Arcadian life together with its isolation partially explains why it was represented as a paradise in Greek and Roman bucolic poetry and in the literature of the Renaissance. The region is not exactly coextensive with the present-day nomós (department) of Arkadhía, which extends on the east to the Gulf of Argolis. The capital of the nomos is Trípolis.


genre n [F, fr. MF, kind, gender--more at gender] (1770) 1: a category of artistic, musical, or literary composition characterized by a particular style, form, or content 2: kind, sort 3: painting that depicts scenes or events from everyday life usu. realistically he.do.nism n [Gk hedone pleasure; akin to Gk hedys sweet--more at sweet] (1856) 1: the doctrine that pleasure or happiness is the sole or chief good in life 2: a way of life based on or suggesting the principles of hedonism -- he.do.nist n -- he.do.nis.tic adj -- he.do.nis.ti.cal.ly adv
neo.clas.sic or neo.clas.si.cal adj (1877): of, relating to, or constituting a revival or adaptation of the classical esp. in literature, music, art, or architecture -- neo.clas.si.cism n -- neo.clas.si.cist n or adj

pas.to.ral adj [ME, fr. L pastoralis, fr. pastor herdsman] (15c) 1 a (1): of, relating to, or composed of shepherds or herdsmen (2): devoted to or based on livestock raising b: of or relating to the countryside: not urban c: portraying or expressive of the life of shepherds or country people esp. in an idealized and conventionalized manner <~ poetry> d: pleasingly peaceful and innocent: idyllic 2 a: of or relating to spiritual care or guidance esp. of a congregation b: of or relating to the pastor of a church -- pas.to.ral.ly adv -- pas.to.ral.ness n ²pastoral n (1584) 1 a: a literary work (as a poem or play) dealing with shepherds or rural life in a usu. artificial manner and typically drawing a contrast between the innocence and serenity of the simple life and the misery and corruption of city and esp. court life b: pastoral poetry or drama c: a rural picture or scene d: pastorale 1b 2: crosier 1 3: a letter of a pastor to his charge: as a: a letter addressed by a bishop to his diocese b: a letter of the house of bishops of the Protestant Episcopal Church to be read in each parish

ten.e.brism n, often cap [L tenebrae darkness] (1954): a style of painting esp. associated with the Italian painter Caravaggio and his followers in which most of the figures are engulfed in shadow but some are dramatically illuminated by a concentrated beam of light usu. from an identifiable source -- ten.e.brist n or adj, often cap
trompe l’oeil - (French: "deceive the eye"), in painting, the representation of an object with such verisimilitude as to deceive the viewer concerning the material reality of the object. This idea appealed to the ancient Greeks who were newly emancipated from the conventional stylizations of earlier art. Zeuxis, for example, reportedly painted such realistic grapes that birds tried to eat them. The technique was also popular with Roman muralists. Although trompe l’oeil never achieved the status of a major artistic aim, from the early Renaissance on, European painters occasionally fostered illusionism by painting false frames out of which the contents of a still life or portrait appeared to spill, or by creating window-like images suggesting actual openings in the wall or ceiling. (Brittanica) 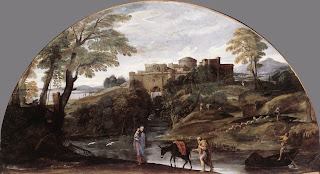 1) What are genre elements and why are they being used here? 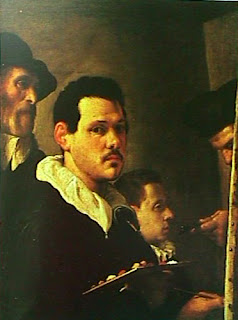 2) What kind of colors are being used? 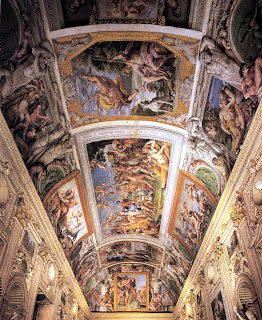 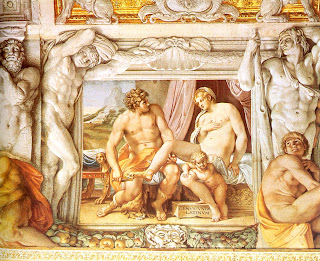 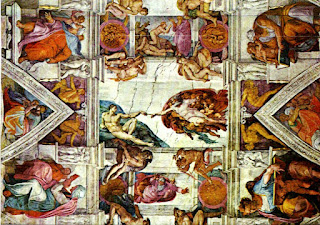 3) Describe the evolution of the iconography and form concerning the depiction of this scene. Use these works as specific examples, do some comparisons. Specifically compare and contrast the how classicism is being used in both works.