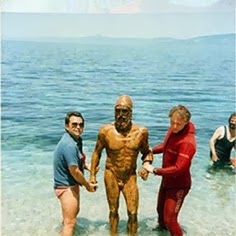 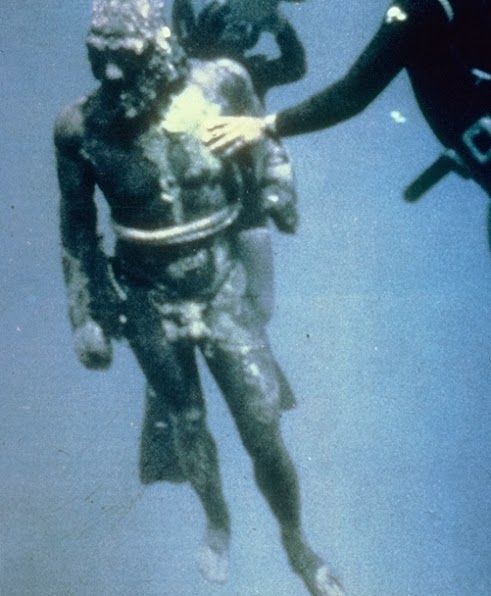 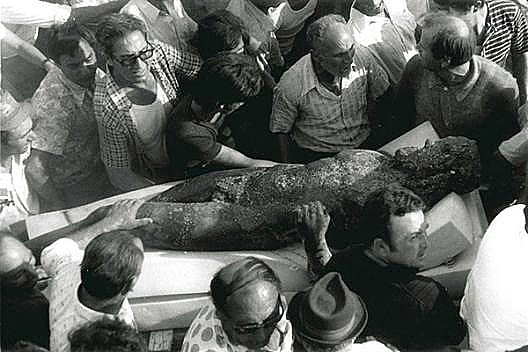 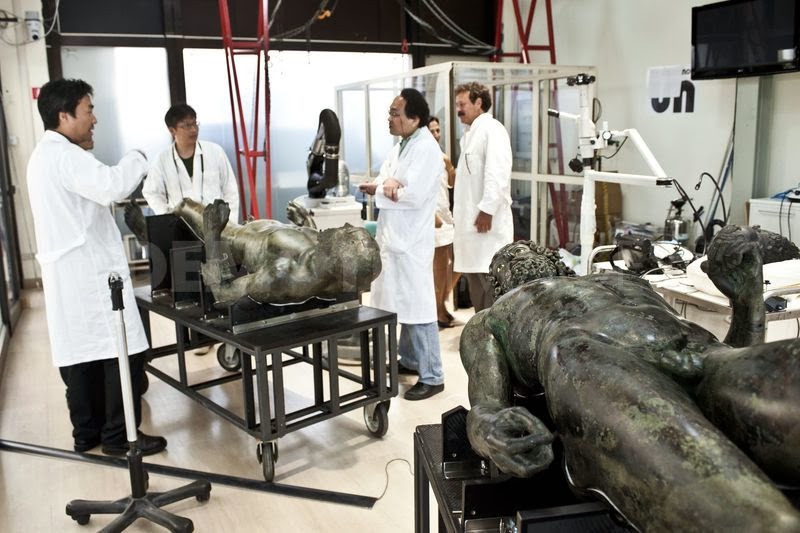 On August 16, 1972, Stefano Mariottini, a Roman chemist on vacation in Calabria, was dive fishing in waters just 26 feet deep off the Ionian Sea coast of Riace, Italy (the toe of the boot) when he saw what appeared to be a human arm in the sand. It was so realistic he thought it belonged to a dead person at first. On closer inspection he saw it was attached to a statue on its side and that there was another statue on its back lying next to it. He alerted authorities and police divers returned with oxygen-filled balloons to carefully lift the statues out of the seabed.

The find caused a sensation. Very few ancient bronzes have survived because they were frequently melted down in later eras for their metal. Most of the Greek bronzes we know of no longer exist in their original form and are only known from Roman copies in marble. Two intact, larger-than-life Greek bronzes are not often found in shallow coastal waters or anywhere else, for that matter.

They were sent to the National Museum in Reggio Calabria for cleaning and restoration. Experts confirmed at that point that they were original Greek bronzes from the 5th century B.C. Early Classical period. Preliminary conservation continued in Reggio Calabria until 1975, after which the statues were sent to Florence for further work in its better equipped restoration labs. Once the concretions, particularly dense around their heads and faces, were fully removed, restorers found exquisite details like individual silver eyelashes, copper lips and nipples, silver teeth and eyes inlaid with ivory and glass.

We don’t know who they represent. Many theories have been bruited covering pretty much every named hero in the Greek literary corpus. Both of the bronzes used to hold shields and spears, so they were probably warriors. The one with parted lips, silver teeth and long, flowing curls is known as Riace A; the one with the helmet and wide eyes is known as Riace B. Based solely on A’s open mouth and featured teeth — unique in surviving Greek statuary — and B’s wide-open eyes, one theory posits that they are Tydeus and Amphiaraus, two warriors enlisted by Polynices to attack Thebes in Aeschylus’ Seven against Thebes.

Statue A would be Tydeus, who ate the brains of the defender who had mortally wounded him, hence the prominent silver teeth. Statue B would be Amphiaraus who was a seer, a role often represented by wide eyes.
Restoration was complete in 1980 whereupon the Bronzes of Riace went on display in Florence and Rome on their way back to Reggio Calabria. I had the good fortune to see them in Rome when I was a whiny kid whose complaints my parents expertly ignored (thanks again, Mom and Dad!). The crowds were insane. My parents still have the posters of each warrior we got at the gift shop framed on the wall. Good thing we took advantage of that opportunity, because they haven’t been allowed to travel since due to their fragility.
By the early 1990s, the statues were showing signs of further degradation. The Florentine restorers had conservatively left remnants of the organic cores used to cast the statues in antiquity inside the statues. Their continuing decay was causing trouble for the bronze shell, so another restoration in 1995 cleaned out the casting cores in their entirety. (The organic materials — charred wood, vegetable matter, animal hair — were preserved for dating purposes but provided no conclusive results.)

In 2009, Reggio Calabria’s National Museum started a major overhaul of their facilities. In order to keep the bronzes safe and to take advantage of the break, they were moved to Palazzo Campanella where they underwent extensive diagnostic analyses and further conservation in a large climate-controlled room behind glass but still on public display.
The project was supposed to be over by March 2011 so they could return to their National Museum home in time for the 150th anniversary celebrations of Italian unification, but the restoration of the statues wasn’t complete until the end of 2011, and the renovations at the museum still aren’t complete.
So for now they remain in their climate-controlled quarters in the Palazzo Campanella. The museum renovations have been held up by budget cutbacks, but the last six million euros have just been transferred so the museum hopes to be ready for the boys to come home by December of this year.
This video is in Italian, but watch even if you can’t understand the language just to see how they moved the Bronzes of Riace out of the National Museum to the Palazzo Campanella in 2009. A few salient points from the interviews: Simonetta Bonomi, Archaeology Superintendent of Calabria, notes that the restoration campaign is tied to the 2011 celebrations of Italian unification and that even though the planning for the move had to be careful and deliberate, when the time came the execution had to be swift to minimize the stress on the statues.
Pasquale Dapoto, Directing Archaeologist of the Restoration Laboratory, rather poetically juxtaposes the statues as symbols of vigorous strength with their actual fragility as a result of the shipwreck that put them at the bottom of the sea and the 2500 or so years spent in corrosive salt water. He also describes the challenge of detaching the statues from their anti-seismic bases to which they were anchored by stakes running from the mechanism in the base up through the feet and legs into the body.

This entry was posted on Wednesday, August 15th, 2012 at 11:58 PM and is filed under Ancient, Museums. You can follow any responses to this entry through the RSS 2.0 feed. You can skip to the end and leave a response. Pinging is currently not allowed.
Posted by Kenney Mencher at 4:17 PM