The Theme of Boys Blowing Bubbles

Recently I took a trip to Seattle and saw this painting.

It got me thinking about the genre and what a painting of a boy blowing bubbles.  I was first introduced to the theme through Chardin. 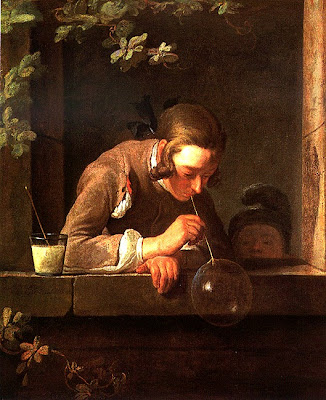 I just thought it was fun that the theme comes up so much and what it seems to symbolize is that youth is fleeting and disappears as quickly as a soap bubble  bursts.  Here's more examples' 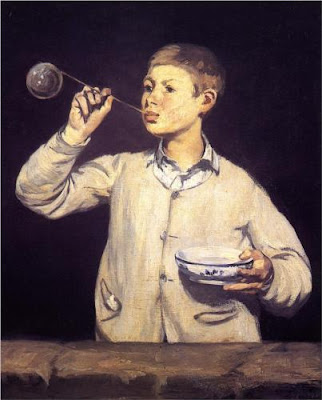 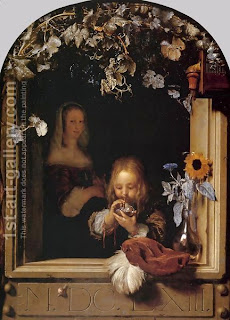 But for years, the painting of the boys was attributed to Jacob van Oost, a 17th-century painter from Bruges. Van Oost has become a bit of a cipher. There is only one signed painting by van Oost, said SAM curator Chiyo Ishikawa (here), but there are many attributed to him. “There hasn’t been a monographic exhibition of all the paintings attributed to him, but if there were, you would be very confused,” Ishikawa said. “The one documented work we know by him looks nothing like our painting. We also had another painting attributed to him [of dogs and a hunt] that looks nothing like this painting. (We deaccessioned that one in 1996 because [it was in bad condition]).”
Ishikawa and others long suspected that Boys Blowing Bubbles was not a van Oost. But whose was it?
In 2002, a scholar of Flemish painting named Katlijne Van der Stighelen happened to be in Seattle, and she came across the painting at SAM. She already had an idea whose she thought it was: Michaelina Woutiers, a female court painter in Vienna—an anomaly. But it wasn’t until Van der Stighelen published a paper in 2005 after a symposium on Flemish patronage between 1550 and 1700 that another 17th-century Flemish scholar, Peter Sutton, suggested to Ishikawa that this painting might be by this unusual female painter. Van der Stighelen concurs.
At this point, the attribution is still the best possible guess rather than an ironclad fact. Like the Goya decision, it’s based on stylistic similarities to four known court paintings by Woutiers, which are held at the Vienna Kunsthistorisches Museum. Unfortunately, the museum’s web site doesn’t include any images by Woutiers, but Ishikawa says there’s one in particular, a portrait of Bacchus, that includes a little boy on the right hand side of the picture that looks a lot like the boy on the right in the SAM painting. “I felt confident enough based on comparative photographs and these two opinions to go ahead and make the change,” Ishikawa said. “The Jacob van Oost [attribution] was always problematic, and this person does seem to be a distinct artistic personality. But really, to be completely satisfied, you’d want to get the paintings together.”
In the late 1960s and early 1970s, with the advent of the Rembrandt Research Project—which in the early stages relied heavily on scientific technology in a search for the “true” Rembrandts—science was held out to be the key to solving attribution mysteries once and for all. But traditional connoisseurship turns out to have as great a role as science. Science may be able to tell you how old something is, or precisely what it’s made of, but consider that Rembrandt, just to take one example, ran a large studio of artists he hired to create paintings that look just like Rembrandts, and you start to glimpse the complications.
In Seattle, with the museum’s relatively limited resources and great distance from the European collections, there have been plenty of question marks. In 2004, Ishikawa said, because of new scholarship, SAM changed the attribution on a 14th-century saint portrait by Allegretto Nuzi to Puccio di Simone. Sometimes, an attribution is little more solid than a bubble in thin air.


Here's a video on Chardin if you wanna learn more.