Thomas Eakins and Drawing with the Brush. 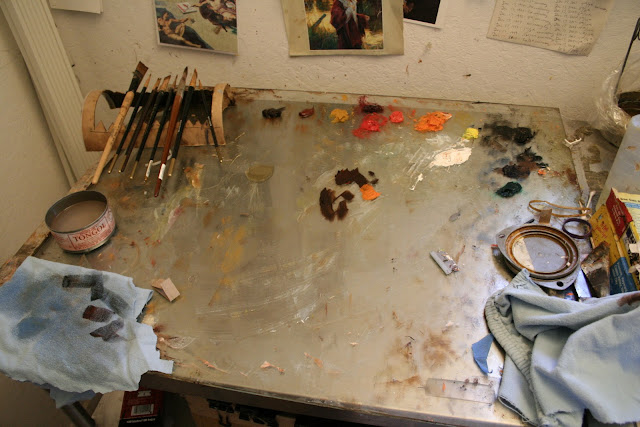 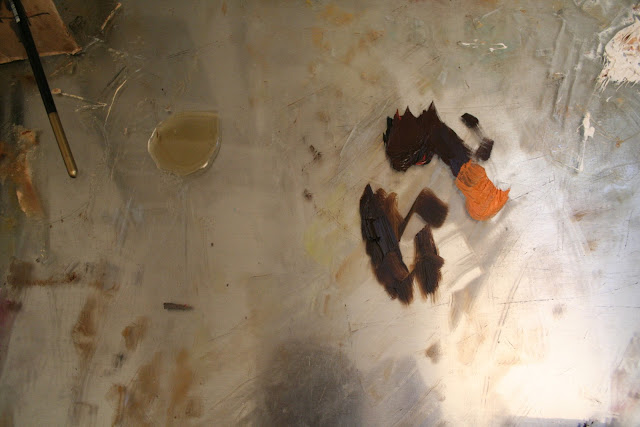 See the Galkyd on the left and the mix of orange and my black mixture to its right.  I then painted in most of the larger dark masses with this modified orange. 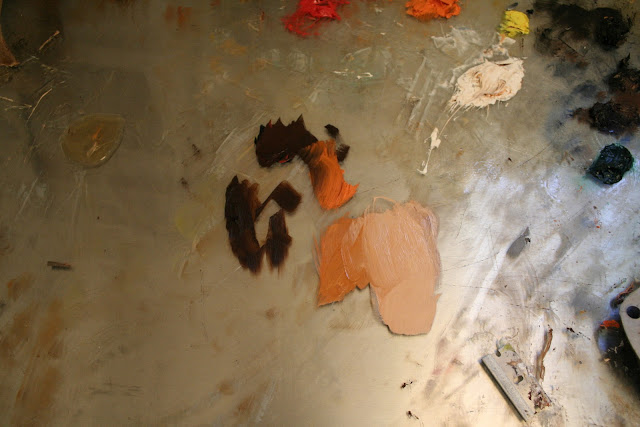 Moving into the lighter areas I mix in white (soft mixing white by Winton) and create a series of flesh tones. 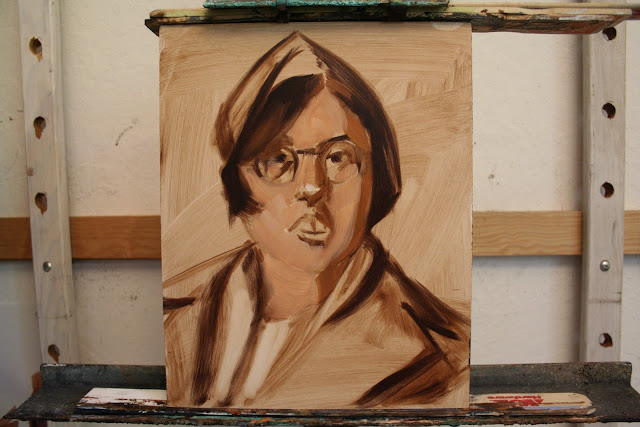 It's sort of a paint by numbers operation at this point where I work from dark to light but mass in the largest and most general tones with the largest brush I have.  My teacher Irwin Greenberg used to say that "Big painters use a big brush." 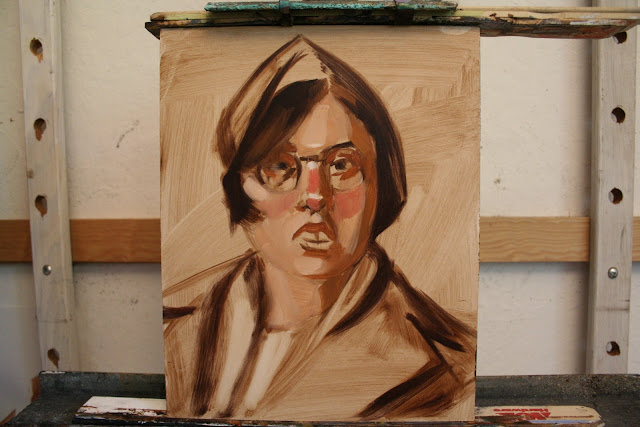 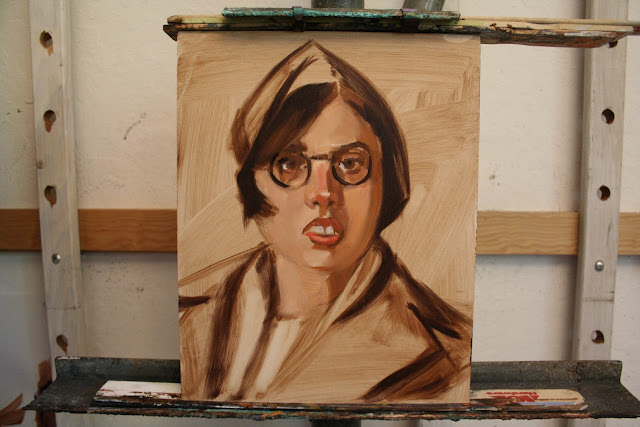 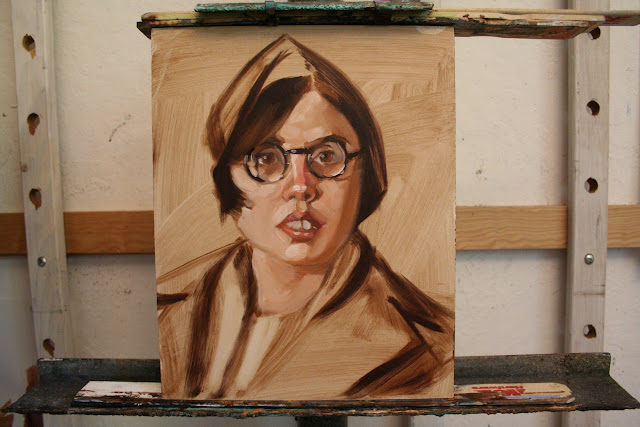 Redefine details of face, brush in some cadmium red light to pink out the cheeks and nose. 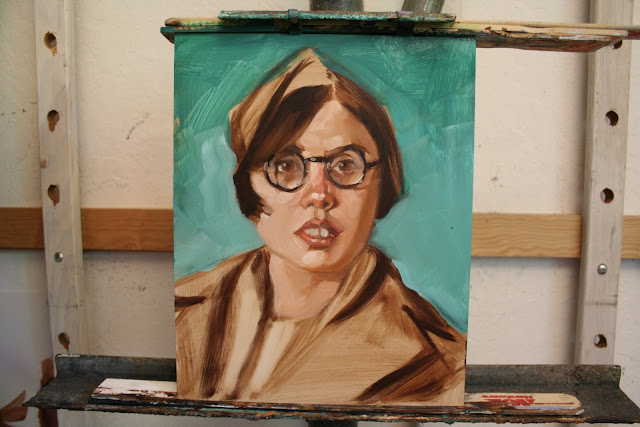 The background is a modified payne's gray with some yellow ochre.  My wife says it's green.  I think it's gray. 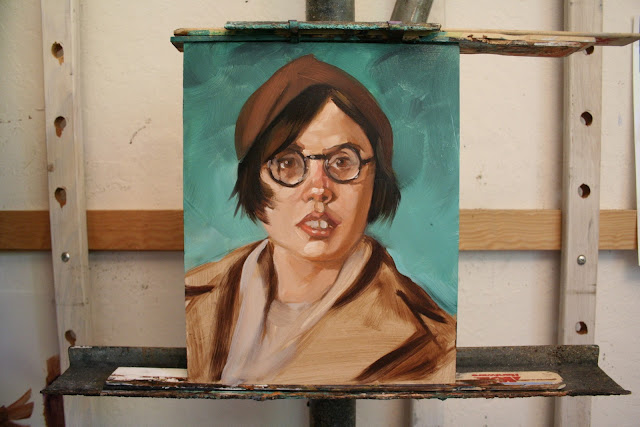 The hat is burnt sienna.
Here's the finished painting. 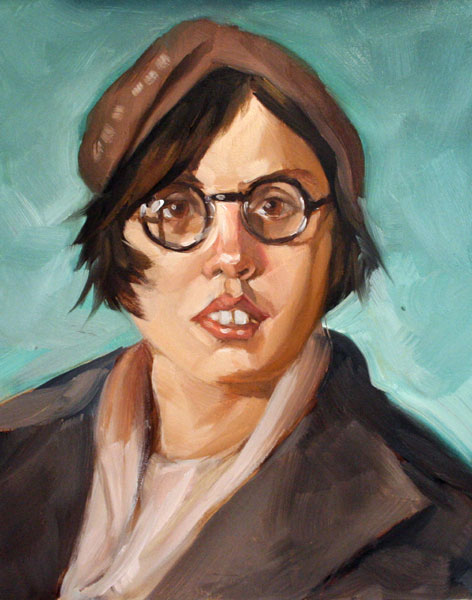 Purchase this on ETSY for $145 More "How to" Articles and Tutorials
The Human Figure

How to draw a portrait
Posted by Kenney Mencher at 11:22 AM No comments:

One of my all-time favorite artists is an artist by the name of Malcolm Liepke.  I was first introduced Liepke when I was in high school in the 1980s.  One of my teachers a guy named Irwin Greenberg also known as "Greeny" which I was work by different artists who he thought were really cool.  Alongside Rembrandt, Michelangelo, and John Singer Sargent, Malcolm "Skip" Liepke was one of those artists who did a lot of beautiful things with a low-key pallette, muted color, and six quick passages of paint that I really admired.

Malcolm Liepke
Flowers In Her Hair, 2011

His wonderful up close portraits in which he sort of stylize is the faces, even as colors stylized, and the creamy passages of paint, add an immediate presence to the faces.  It's almost like the paint is skin.

I also really like some of the counterbalancing curves that he adds into the anatomy.  There is a gestural quality to as figures that one can't beat.  I even think the hair has a quality to it.  That's like that.  There are these little bravura touches that are very similar to something that Rembrandt might do.  The highlight on a nose in the peoples of the, I and wonderful composition.

Lately I've been doing some paintings especially small portraits that are inspired by Malcolm Liepke, Sargent and Rembrandt.  I'm also incorporating a little bit of a fashion magazine sense to it and maybe even a little bit of the pinup aesthetic.


Posted by Kenney Mencher at 5:02 PM No comments: 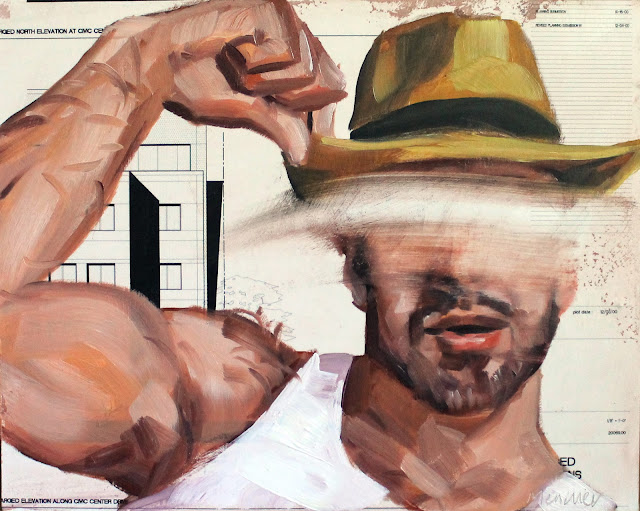 A Bear and a Lion 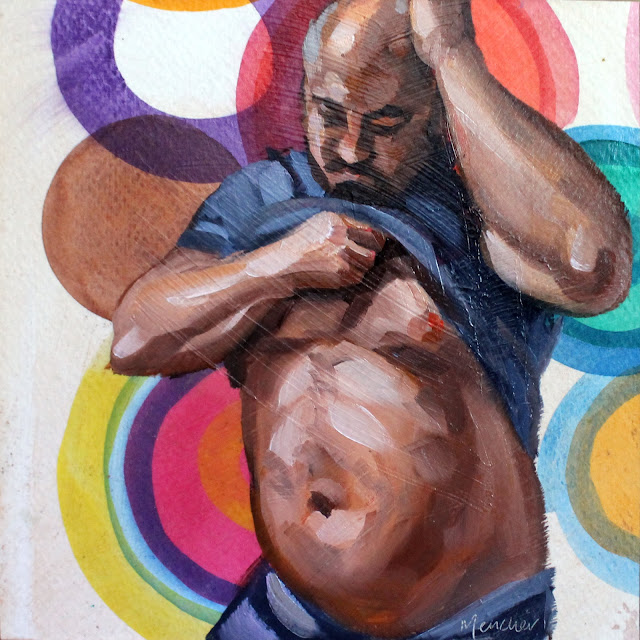 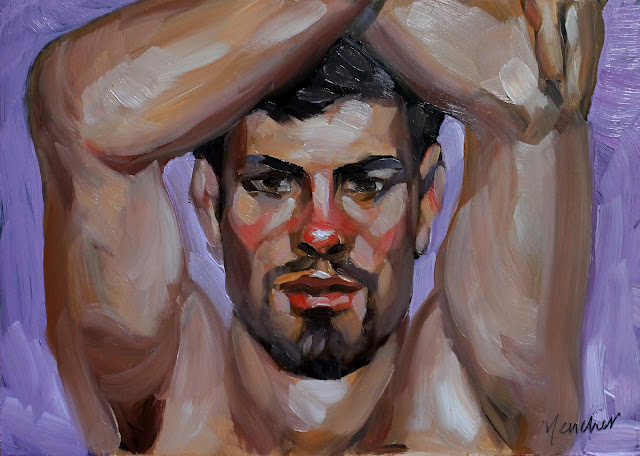 "Unemployment Line", a work in progress by Max Ginsburg. 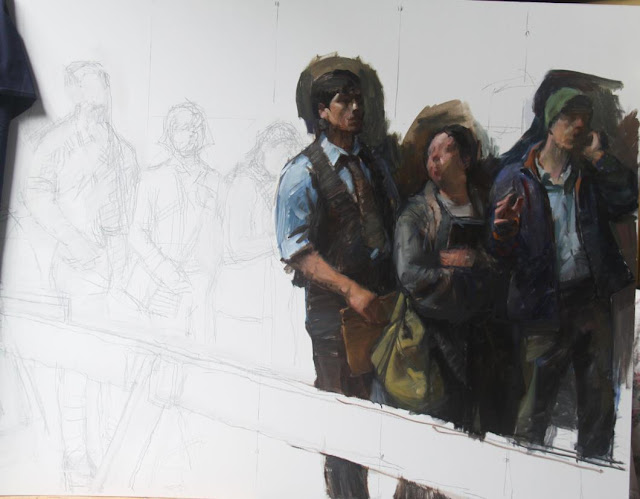 "Unemployment Line", a work in progress by Max Ginsburg.

Here is an outline of how he begins painting a figure composition:

1. Conceptual pencil sketches.
2. Painting studies of each model.
3. Compositional pencil sketches based on the painting studies.
4. Place a one inch grid over the compositional study to be used which, in this case, is 4" x 8".
5. Stretch a canvas, 40" x 80", the same proportion as the sketch, and draw a 10" grid.
6. In charcoal approximate the position and size of the figures.
7. Paint, in a direct alla prima manner, each model as a loosely painted block in from life. So far in this painting each model posed 3 or 4 hours.
8. When all the models and background have been blocked in the development of the forms and the composition will proceed, with the models returning for several sessions each.

Max Ginsburg commented : A lot of sketching, research and thinking has gone into this before I reach this stage. I have also painted studies of each person to reinforce the unique look of each model. The size of this canvas is 40" x 80" based on an initial 4" x 8" compositional sketch. (Half of the canvas, left side, is cropped here). With the aid of a grid I have roughly indicated the size and placement of the figures. Then I had each model pose for 3 or 4 hours for each block in. The manner of painting is alla prima and without details. As the rest of the figures are blocked in I will develop the compostion as well as the figures and to some degree even the concept might change. I do not adhere to rendering an exact blueprint but to a looser flow of forms, that is constantly undergoing changes, until it expresses the basic "overall message". This thinking is a part of my overall apprach with respect to both my conceptual and painting application. I hope I answered your question, Alan. And yes, I have gotten lost within my process and failed at times. Two successful figure compostion paintings that I basically painted this way is "Bus Stop" and "Torture Abu Ghraib" (see www.maxginsburg.com). As I finish more sections, block ins, development on this canvas, I will post them.
Posted by Kenney Mencher at 7:00 AM No comments: 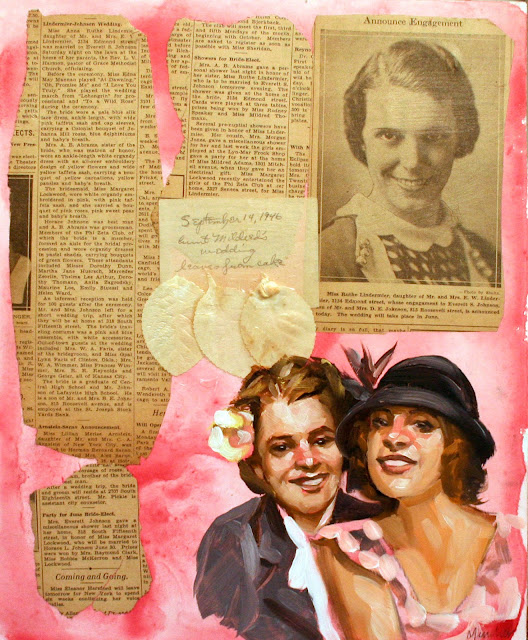 “I am very lucky – really. I’m so old, I have a matron of honor – not even a maid!” she said breathlessly after climbing 122 stairs to Mildred’s third f loor apartment. It was 7:30 and they both had just finished another 60 hour week at the frock coat stitchery.

This conversation was so common it had become the stitches holding Ruthe’s dream together. Mildred worried that visions of picket fences held more importance than the fencing class they had taken together at finishing school and even though she had shared many counter arguments to the dream, she was troubled by the idea that her dearest friend would not find a better reason to get married than being “lucky.”

“Last chance,” Mildred said pausing at the top of the stair. Her hands on the knob and rattling her keys, she continued. “Do you love Everett or just the idea of being married? Because I know you – the romantic in you needs reciprocity, reconciliation, respect.”

“No! No justification! Please answer from your soul. We’ve been friends for seven years. This is the role I play – your conscience, your objectivity.”

“I’m tired of feeling insecure, of answering the questions, of having a life on hold. So yes, I love him. I love him for rescuing me,” Ruthe said trying to conjure a spark at the top of the stairs and the end of the week.

And Mildred went silent, smiling to assure herself this was supposed to be a moment in their lives to remember forever. The door opened. “Surprise!” emanated from the dark.

Inside, the lights came up and the peacocks crowed with flamboyance, their jubilance pressed to the edges of the third floor walk up. Ribbons of royal blue, rose pink and sunflower yellow flowed from the walls and tables, from the waists and hair of partygoers who had been waiting silently to fill Ruthe’s future with dreams of rich and lavish gatherings of which she would be monarch. Tables of salads were dressed with the most extravagant olives and pickled peppers. The meats selected carefully with the hosts having waited to the end of the day to get the best bang for their buck, the best cuts for the coterie assembled.

Her cousin Morgan was in collusion with Mildred for this affair and knew the future couple would have to learn about thrift shopping for inexpensive - yet not cheap - foods if ever they could hope to entertain in a proper fashion. While Morgan’s life was filled with bounteous bashes with Polynesian themes and cocktail parties, Ruthe’s would be in pursuit of the same with a fate sealed to always fall short. She knew this had to be a balance of prudence and propriety; it was her gift to her poor cousin who was finally marrying, finally joining the ranks of proper society and leaving title of “spinster” at her new husband’s doorstep.

It was an evening of big bands on the Victor Victrola, of Manhattans and meat pies. The girls from the shop danced and giggled, crowing over their most modest friend as the evening called for her coronation and resignation since Ruthe would be taking on a new position of homemaker in less than a week. “You are so lucky!” they envied. “A home, a toaster, an iron – a husband who wears ties and a man to care for you.”

These sentiments echoed in Ruthe’s mind together with her best friend’s admonishments, her secure cousin’s lessons, and her own wishes. By the time the celebration was three hours old, the flock began to disperse, Morgan among the first to depart. Dishes began clanging the time and the door closing reemphasized the same. Ruthe quietly slipped out onto the small balcony holding onto the last few sounds and smells of the evening.

Then a gentle rapping – it was Everett who had come looking for Ruthe. The oaken partition gave way to a crew cut man wearing his tie loosed about a shirt with two buttons undone. He took his hat off as he peered inside the rookery.

Dishes settled in the sink as Mildred poked her head around the kitchen door. “Oh – hi Everett! Come in! A drink? A snack?” she greeted wiping her hands on her soiled apron.

“No, no. I don’t care for any right now, thank you. I was at Johnny’s apartment and just wanted to walk Ruthe home if she was ready to go.” He quickly added, “But I don’t want to rush her! If you are still having your hen party, I will just be on my way.”

His voice curled around the apartment walls and at this point, finally reached Ruthe’s ears, reaching into her mind, into her body, into her soul. That voice was salve to her spirit – much more than luck that it found her on Mildred’s balcony.

“Hi Sugar! I’m outside getting some air,” Ruthe called. “Please join me!”

Mildred’s mouth curled up and an eyebrow raised. “How can you resist that?” 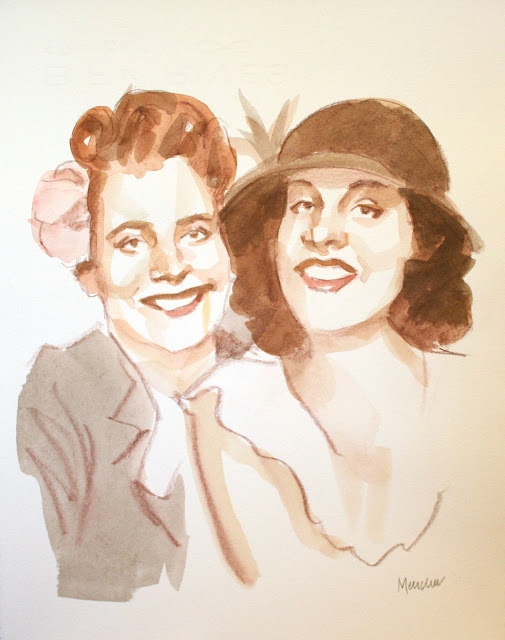 Everett held his hat against his chest as he kissed Mildred on the forehead when he passed her by. “Thanks, Millie,” he murmured as he floated to the cool air of the veranda where Ruthe stood leaning against the wooden rails staring upward. “Hi Beautiful – searching for shooting stars?”

“You know it,” she emitted without tearing her gaze from the heavens. “Look with me.”

Placing his left hand on her right on the rail, they both stood on the terrace seeking answers and illumination, sharing their hopes and dreams without saying a word and feeling very lucky.
Posted by Kenney Mencher at 1:39 PM No comments:

A Bear and an Otter (Two New Paintings) 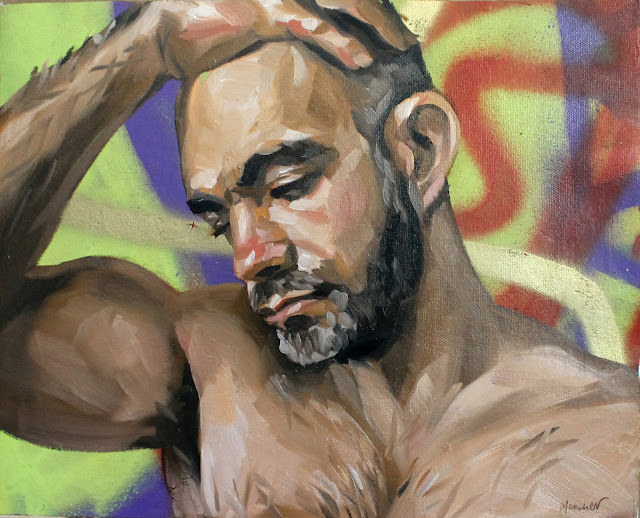 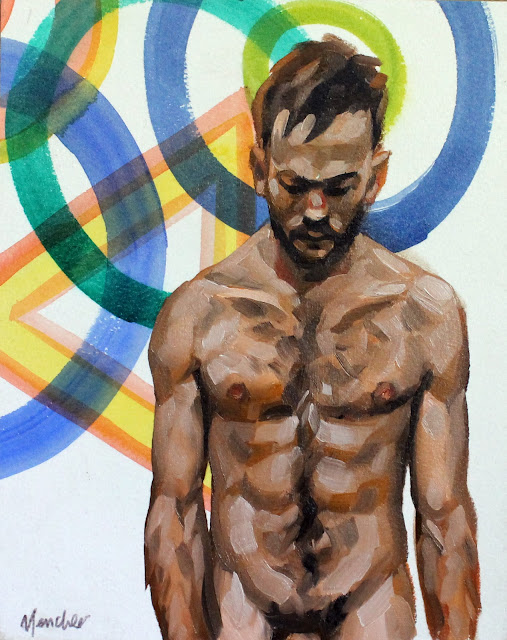 Posted by Kenney Mencher at 3:40 PM No comments: 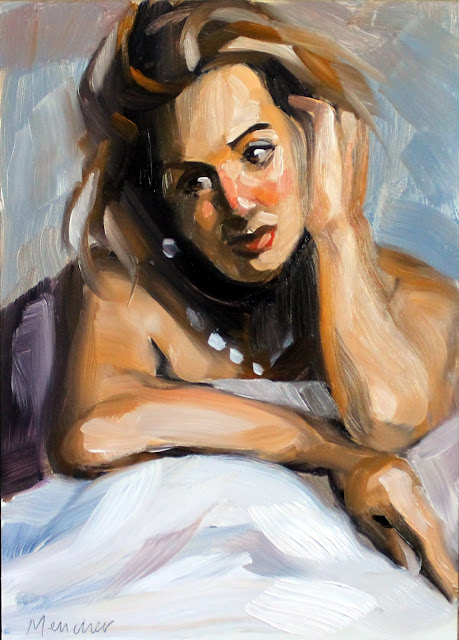 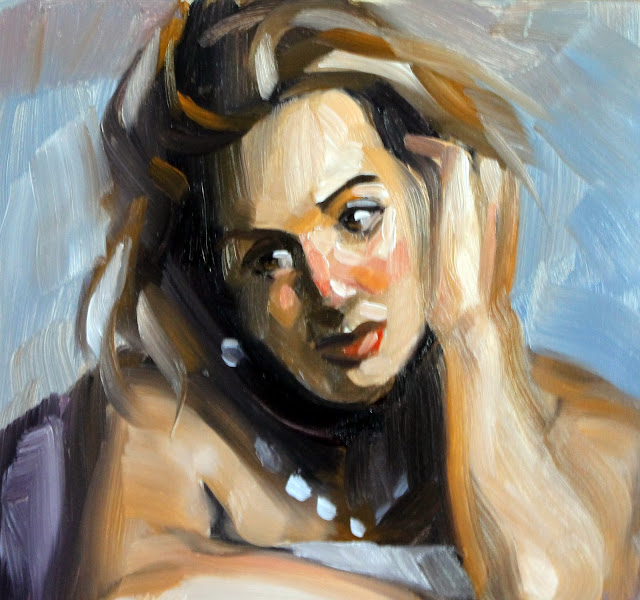 Posted by Kenney Mencher at 1:33 PM No comments:

An Unexpected Husband, oil on masonite panel 8"x10"
Buy this on Etsy
Posted by Kenney Mencher at 9:00 AM No comments: