The Winner of the Last Flash Fiction Contest is Patrick Nelson 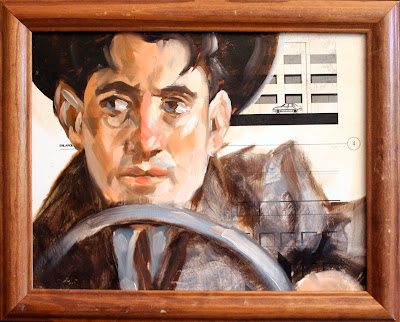 The Carolinian by  Patrick Nelson

Tanqueray, rock candy and what looks to be old, roasted almonds. How can a fellow live on that? It was all that was in the glove box of the car I was hired to drive and though those items weren't mine to take, I must admit I was tempted.
It's not like there's any box lunch being provided for this kind of work, but I've never had this type of job before so I got no ideas about food. Unfortunately, I only had a bologna sandwich and a cup of mud in my stomach from about five hours ago.
On the job experience.
I lived in Carolina most of my life when my daddy came north to New Jersey on the promise of long-standing work. He  dug us up, roots and all, and placed us firmly in the hard, sandy dirt of New York's bastard child. When we got here, daddy's job dried up like a bad crop in drought and he, momma, my three sisters and I all clung to the hairy belly of the big city like a bunch of blood-starved ticks on a spotted boar. We took odd jobs wherever we could and pooled the money only to end up being all the time back on our rent by three months.
That's why I had no choice but to take this job: We wouldn't last another winter here and we couldn't afford to move back. The money I was promised would have done much to throw that greasy-haired landlord off our scent for quite a while as well as make things a lot more bearable in our little corner of the holding cell of hades. 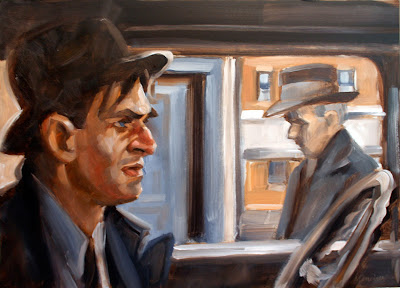 Fletch would not tell me exactly how he came to know Sally, but I gathered from my cousin's new fancy suits that they were not packing apples at the orchard for their money. He did tell me that Sally was an important fellow here abouts. Sally, the man who hired me to spin the wheel, was a big man, with a tight lip and in need of a driver. From what I could tell about our stops, he was an ambassador of sorts. A united nations of criminal activity.
No matter how I tried, Fletch would not tell me what happened to the old driver and I got the distinct impression Sally was not going to tell me. All Fletch would tell me was how he bragged to Sally about what a crackerjack wheel ace I was; how I had gasoline in my veins and nerves tighter than a '40 Ford's suspension. He told him about all the rallies and races I won and even about the dozens of law men I outdrove. Those where regulators and even some of the esteemed officers from the New York City police department--when I could get behind the wheel and give them a reason to give chase. That was the part that put me under Sally's spotlight.
Sally kept me real busy my first day. Seven a.m., I drove him to a Russian spa where he stayed for over an hour and a half. He came out moist and plump like a boiled hen. His already pink and fat neck glistened as it bulged in the constraints of his tailored shirt, I had the feeling he was not in there just for his health. He was carrying a big carpet bag that he didn't have when he went in. I guessed it wasn't full of dirty towels. 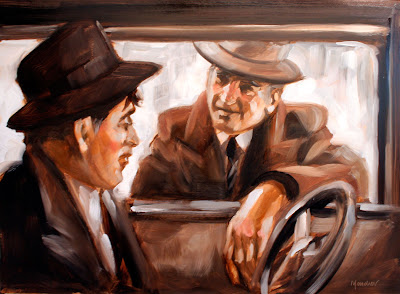 This routine continued for the better part of the day: we stopped at an Chines opium den, a church that I later learned was a synagogue, and a Negro dance hall. Sally emerged from each one with a similar bag or sack or satchel, all of which bulged with the same contents: rectangular shaped objects that pushed against the edges of the bags and toyed with my imagination.
Throughout the day and into the afternoon, his tight lipped demeanor changed to that of an abusive, bigoted denizen of the armpit of the east coast. He went from calling be a bumpkin, hayseed and hillbilly to questioning if my parents weren't perhaps brother and sister therefore explaining my "lack of intelligence"and "slack jawed, idiotic puss." He continually berated me for not opening the door for him or parking close enough and then he even accused me of looking in the bags that were "none of my cracker-ass business."
The whole time I sat patiently waiting for that mean bastard, I longed for the mountains of my youth and wished daddy had never decided to come here. I dreamed of the wind flicking the bugs into my teeth and the thrill of danger waiting around every dusty, hairpin turn. 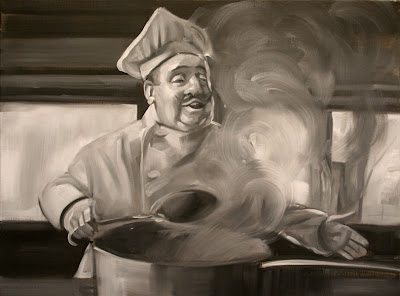 Our next, and I hoped final stop, was at an Italian restaurant on the edge of little Italy. My stomach growled loudly just looking at the cartoonish sign of a fat chef with a big handlebar mustache holding a plate of steaming pasta. I wondered if we would be getting something to eat now, but I held out as much hope for that as I did for a return to prohibition.
I heard Sally rustling around in the bags and looked in the rear-view mirror to she him nervously pulling out stacks of various amounts of money. He looked into the restaurant as he shoved a good amount of the bills from each bag into a leather briefcase that I hadn't seen him with before.
"Okay, pinhead!" he addressed me, "Keep the engine running and be ready to drive your hillbilly ass off." With that, he hopped out of the car with the various bags and waddled into the restaurant. I looked over the seat and saw the shiny brown leather briefcase sitting on the back seat. I heard the tinkle of the bell above the front door and watched him through the big windows as he made his way to a table in the back. A dark and oily looking man fatter than Sally waved him to sit down while he shoveled pasta into his tomato sauce stained mouth.
Sally sat and placed the bags on the table and the fatter man quickly scooped them onto the floor. A waiter appeared, placed a plate of pasta in front of Sally and disappeared just as quickly.
My stomach howled at the injustice of his meal and the lack of mine.
As I watched them devour their food and gesticulate broadly and emotionally at each other, my mind drifted once again back to the days of my childhood and for some strange reason, settled on the bittersweet memory of my old 'coon hound Cyril.
My father had bought him from a neighbor for the purpose the dog was bred: hunting. After a few weeks of pampering from me though, the little pup was ruined for hunting and was grudgingly declared by daddy as our new house pet. He was a good dog, but one day while running wild through the woods, he was bitten by a rabid animal of some kind and turned on us. Before father could load his rifle and draw a bead on the crazed animal, he ran out onto the old road in front of our house and was struck by a timber truck. There wasn't even enough to bury.
I snapped my attention back to the table where Sally had sat and saw with astonishment that the two men had broken out into a fistfight. Even though the other man was bigger than Sally, he didn't stand a chance in a fair fight. Sally threw quite a few impressive blows but the other man stayed on his feet long enough to pull a gun from under his jacket. With the proverbial tables turned, Sally turned them back in his own favor by lifting the table they had been seated at and tossing it over on the man with the gun. This bought Sally enough time to make it out onto the sidewalk. He came running out into the street fast and was waving wildly at me to pick him up. I threw the car in gear and quickly swerved out of the parking space and raced towards Sally.

That's when I again recalled my poor old coon hound, Cyril, and how he had died...

“The Carolinian” by Patrick Nelson is the winner.  Nelson (a lot like Matt O’Malley and Stephen Rogers) is a clear and funny voice.  For example Nelson writes , “I drove him to a Russian spa where he stayed for over an hour and a half. He came out moist and plump like a boiled hen.”  I think the thing I like about Nelson’s story (ies) is the clear punch line at the end.
How friggin’ cool is Matt O’Malley?  He’s clear writing style and excellent sense of humor just pushes my buttons.  Just read the damn story and you’ll see why he’s one of my favorite writers.  I guarantee you won’t feel alienated by him.
Stephen D. Rogers and “Cotton Joliet” (her name like her story is evocative clear and has a great sense of humor) both nailed it it in their short pithy vignettes.  Like Nelson Joliet’s had one of those punctuation point endings that love about flash fiction.  Also like Nelson, Rogers is able to give a sense of time place and plot in a few short passages.
A bit anachronistic but close to my heart was “Driving to Distraction” by Helen Chapman.  Totally cute ending and quite by coincidence I was listening to Elvis Costello’s “Watching the Detectives.”  In an Austin Powers kinda way I feel like a smoke and a pancake.
Also of note was Albin Attenti’s tale.  It was a great exercise in misdirection.  I guess the two cops were zigging while the suspect was zagging.  In a sad sorta way, I think really understood Frank.
Read all the stories here
http://kenney-mencher.blogspot.com/2011/09/new-flash-fiction-contest-driver.html
This is the second version of this show!
Round #2 of Renovated Reputations will culminate in a show at Ohlone College in Fremont, California at the Louie Meager Art Gallery in February 2012.
Stories will be published in a vintage style  newspaper catalog and the gallery will be converted into a 1930 or 40's cabaret set and students will be acting the stories out as monologues at some of the events at the college in the art gallery.
More competitions posted on my website at:
http://www.kenney-mencher.com/
Posted by Kenney Mencher at 3:49 PM