Pat O. Butter and Melba Toast contest is a tie between Patrick Nelson and Helen Chapman 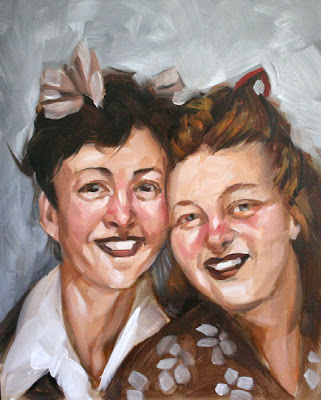 Buttered Toast by Helen Chapman
‘Melba? Melba! Come on! It’s almost time!’ Patricia Olivia Butter straightened the seams of her hose one last time, then bent to buckle the straps on her Mary Jane pumps. She had been waiting all week for this, and she wasn’t about to be late.
Her friend exited the bedroom, tying her hair in place with a ribbon as she walked. ‘I’m coming already, Pat. Geez Louise, you’d think you had never been to a movie before. So we’re a few minutes late. We’ll just watch the news real after the feature.’
Pat rolled her eyes at her friend, then shrugged into her coat. ‘We’re going to see everything in order. Now come on!’
The two friends hurried from Melba’s house and down the street. It was a good five blocks to the Arcade Theater. Pat knew they could walk it faster than waiting for the bus do take them up Harford Road. Besides, they didn’t have enough money for the movie and round trip fare. Pat linked her arm with Melba to keep her moving.
‘Gee, Mel. You’d think you didn’t want to see that good looking candy butcher you were making eyes at last week.’ She grinned when she saw her friend blush up to the roots of her red hair.
‘I don’t know who you’re talking about, Pat.’
Pat laughed and squeezed her friend’s arm. ‘Oh, I think you do. Brad something, wasn’t it? Brad...Crust?’
Melba pulled away from Pat. ‘You know good and well his name is Brad Toast.’
Pat noticed that Melba’s step quickened a bit as the marquee lights of the Arcade came into view. When they got close enough to read what the feature presentation was, Melba stopped short.
‘Oh no. You’re not getting me in there! Nuh-uh. You know I can’t watch those kind of movies.’ Melba shook her head so hard the bow she had tied so carefully went askew.
Her friend reached up and tried to straighten the bow as she spoke to her in what she hoped was a calming tone. ‘Now, Mel...just calm down. We’ll get a seat in the back row on the aisle. You can sit on the end, okay? If anything really scary starts to happen, you can go out and talk to Brad in the lobby.’ Pat finally gave up trying to straighten her friend’s bow. Instead, she reached up and pushed her own slightly to the other side, so at least they’d match. Who knows, maybe they’d set a new trend.
Pat took Melba’s hand and half dragged her the remaining half-block to the entrance to the Arcade. They walked in from the street, then down the hallway papered with broadsheet posters of coming attractions.
‘Look at that, Pat. Why couldn’t we wait until tomorrow? Then we could see Old Yeller.’
‘Do you really want Brad to see you with your eyes all red and your mascara running? You know how you get when you see animal movies.’
They bought their tickets and went in through the double doors. The smell of popcorn was redolent throughout the lobby. The small candy counter held boxes of Jordan Almonds, Good n’ Plentys and Nonpareils.
The lobby held a few people. Men and women standing about finishing their last cigarette before they went inside, a few children complaining of being taken home as they left from the previous showing. Melba didn’t understand why anyone would bring a kid to see a movie like this.
‘Pssst.’
Melba stopped dead in her tracks. She looked to the left.
Brad Toast stood behind the candy counter. He was assembling popcorn boxes with rapid precision. As he worked, he stared at Melba.
Melba smiled at him somewhat tenuously.
He gestured with a nod that they should come over.
Melba hesitated. She really didn’t know this man. How forward of him to do this in front of everyone. Why, she should just turn around and report him to the manager.
Pat smiled broadly and dragged Melba across the lobby to the counter. ‘Hi, Brad.’
The man in the red jacket trimmed with gold braid merely nodded at Pat. ‘Melba, I didn’t know you liked this kind of movie too.’
Melba felt Pat give her an elbow in the ribs. ‘Oh sure. Me and Patty, we come to these things all the time. Can’t get enough of them. The scarier the better.’
He grinned. Melba thought she swoon when he showed his dimples to their best effect. He set the last box aside and leaned over the counter to whisper. ‘Sit in the back row and save me a seat on the end. Once the feature comes on I’ll be in. Been wanting to see this one all week, and this is the last night.’
Melba fairly floated into the auditorium. Pat stopped just inside the door and moved into the last row against the wall. There were only three seats on that row, and Pat made sure she sat against the wall. Melba sat in the center seat and fidgeted nervously with her purse.
The houselights dimmed and the projector roared to life in the booth. A Movietone Newsreel flickered on the screen, surrounded by blue velvet curtains and proscenium. The newsreel gave way to a cartoon. Melba wasn’t sure if it was Tom and Jerry or Sylvester. She didn’t care. All she knew was that Brad was coming in to sit with her, and she had her best friend to thank for it.
Finally, when the selected shorts and previews ended, and the screen went briefly black.
Allied Artists Pictures Presents
a Walter Wanger Production
Invasion of the Body Snatchers
Melba was staring at the screen. The music was creepy, the credits set her on edge, even the clouds in the opening sequence scared her.
She almost screamed when a box of popcorn appeared in front of her, and a red-clad arm slid across the back of her seat.
______________________________________________ 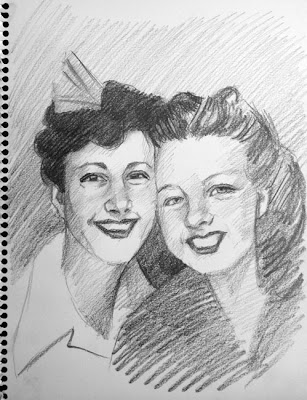 You Magnificent You by Patrick Nelson