This contest is closed.
Please visit my website for an index of more competitions!
http://www.kenney-mencher.com/
It was a tie between Brian Newlin and Angela Readman.
Both will receive drawings.
Also, I'm going to have to make a painting of Chastity because Michael Gray's story was so good, so I'm sending him a drawing as well.
I LOVED ALL THE STORIES
Thank you all so much for participating.


Win this drawing of Chastity Beldt, graphite on paper 12"x9" 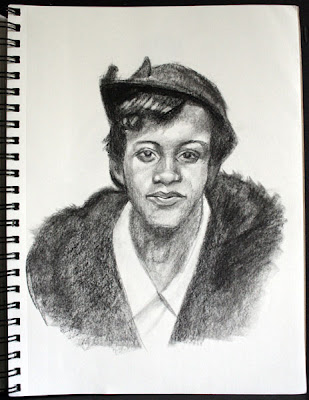 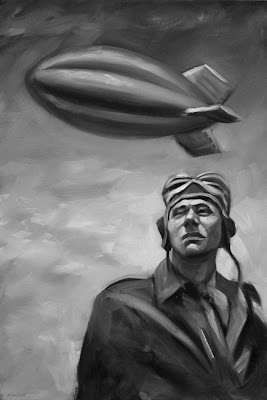 by writing a story about the Aviator, oil on canvas 30"x20"


The story you write should be a "Flash Fiction" which is a complete story in one thousand or fewer words.  Please post the story in the comment section, you will have to provide your name and an email address in order to be qualified to win or you can e-mail me at kmencher@ohlone.edu with your info.


There is a problem with how many characters can post (only about 4,000) so if you cannot post it.  E-mail it to me at kmencher@ohlone.edu


Here are some of the stories about "The Aviator" that were sent to me by e-mail.

The Aviator by Brian Newlin
John had always loved the sky. The stillness. The wind. The sense of peace and clarity that it gave him. He had been born in the close, smoke-filled narrows of the South Bronx, with the black ribs of the Harlem Line obscuring the grey sky outside the apartment windows. It wasn't until his father had died, choking and rattling with soot filled rage in his lungs, that his mother packed him up for the wide open spaces of Iowa. Standing in the cornfield of his uncle's farm, John stared out into the endless crystal blue horizon for the first time in his life and with the sound of a thousand cornstalks rasping in his ears, he swore someday he would fly.

Years later, right after Pearl Harbor, John enlisted in the Navy. He waved goodbye to his mother at the bus station, never imagining this would be the last time he would see her. "Why the Navy?", she had asked. "You've never been in anything but that old rowboat." But it wasn't the ocean that John was looking for. It was the sky, and the Navy had announced a program that had gripped his heart like a fist. He had read about the airships, even seen one once on a newsreel at the movie theater, but could barely believe that he was finally here. The doors slowly rumbled open and John saw the blimp, it's logic defying mass swaying in the breeze like a cloud made solid. He found himself laughing, wondering what his mother would say back on the farm in Ohio. Ohio? No, it was Iowa.

Floating high over the foothills, John could barely keep focused on the controls in front of him, his eyes constantly locking on the openness of the skies around him. Every gust of wind caused the blimp to rock and sway, and there was a constant low hum of the engines that filled the cabin, almost like the sound of a strong wind through the corn. Or was it more like the rumble of the train past his bed when he was a child? It seemed so long ago. It took all his willpower to guide the airship back to base and land, he wanted so much to fly forever.

He saw her for the very first time at the beach. He and some of the guys had driven out to the shore on their day off. As they spread out blankets, John spotted her standing by the water, wearing a bright blue swimsuit and her sunshine yellow hair tied up with a red kerchief. For the first time in a long time, John found his eyes fixed on the girl in front of him and not up into the clouds. Feeling that powerful grip on his heart once again, he mustered up the courage to talk to her. Her name was Kate, and they walked and talked for hours. He had never seen hair so.... red? Brown? No, blond.

How could he ever forget that blond hair?

The first mission was over the coastline of Peru, scouting for enemy subs. John fluctuated between joy and terror as the airship floated lazily over the waters. He tried to keep his mind on the task at hand, but it kept drifting back to K--- and her blond hair. Kate. They never did find a sub, but John had used the long hours to make up his mind to marry her. The wedding day was like a dream, ----'s hair done up in a bun, her white dress like a cloud against the bright blue sky. His parents had even come out for the wedding. Hadn't they? John couldn't remember.

The following years were filled with joy. There was a house. It was yellow. Or white? His wife, he loved her so much. They had a son, and they named him after his uncle -----, who had a farm... somewhere. There was corn, he thought. Yellow. He remembered yellow. He wished he could remember her face. She was so pretty, even until she had passed away that morning. She wouldn't wake up. Sad. So sad. But there was always the sky.

"How is he today?", Peter asked the nurse. His father looked so tiny and frail, sitting in that wheelchair out on the lawn. "He's had better days. I couldn't get him to eat his breakfast but we'll try again later.", she replied, tucking the blanket around his legs. Peter hated what the disease had done to his father, thinking that the man had deserved better than this. It was as if his memories had floated away like balloons.

John's watery eyes stared out into the endless crystal blue horizon and he hoped his wife would be home soon. The rasping of the wind in the trees sounded so familiar, but he couldn't remember what it was.

The exhibit will include a series of 20-40 paintings and mixed media works ranging in size from 8”x10” to 18”x24” framed with thrift store and vintage frames.  In addition to the exhibited works ArtHaus is publishing catalogs signed by me and as many of the authors as possible.  Catalogs/books will consist of image of the painting with the text of the “flash story” surrounding the image.  If I can get the authors to come to a book signing/party, authors would sign their pages for some of the printed stuff.

We're going to have a photobooth for the show for participants to play with and vintage costumes.

Of course I'll send the authors free copies of the catalogs.


I will announce the winners the day after the closing deadline for the competition. I'm planning on doing one flash fiction competition a week every Monday from now until April.  You can preview the works I have so far completed here:
http://www.kenney-mencher.com/catalog/recent_work.htm

Posted by Kenney Mencher at 9:06 PM