Speaking of Painting Glasses of Water: Variations on a Theme

A couple of days ago I posted an article on how to paint a glass of water.  In keeping with that theme I thought it might be cool to discuss how I come up with a theme for a body of work.
Painting is one of those art forms, like writing a song, or a book, in which a central theme can unify and interest both you and the viewer.  I think that if you pick a motif or symbol that you find fascinates you, your paintings will be sincere and perhaps satisfying pictures that can excite the artist to get into the studio and begin working.
My paintings start with a concept and most recently, I’ve found that sometimes working with a single theme and exploring variations on it, I’ve been able to come up with a series of cohesive paintings that are interesting for the viewer and for me to make.  I’ve always been attracted to the works of some older Netherlandish masters such as Brueghel and Bosch who worked with allegories, proverbs, and parables.  This lead me to explore the idea of working with similar ideas, most notably the cliché of the “half glass of water.”
I started my exploration of the theme of “Is it half full or half empty?” with a photo shoot of my friend Jim and my wife Valerie.  Since my work is slightly fussy realism and I can’t really afford to have models sit for the forty to fifty hours it takes for me to make a painting I work from digital photographic reference.  I actually take somewhere between two to ten images and work from manipulated and blown up photographs and use these in place of close up details etc.  You can read about how I use photographs here.

I got my ideas for the pose initially from two paintings by two Baroque masters Caravaggio and Velasquez.  “Boy Being Bitten by a Lizard and The Water Carrier of Seville have long been two of my favorite paintings because of the heightened sense of chiaroscuro (dramatic light and shadow) and also because both of these artists included a clear glass of water in their paintings.  What I found so great about this theme is that it embraced all of my strengths and none of my weaknesses.  It also was a bit of a challenge for me to paint a clear glass of water.  My first painting of this theme was an image called “Decisions.”
For the pose in “Decisions”, I asked Jim to think about different points of view or emotions about the glass of water and I moved him around the table.  I was able to take several of these images and put them together in a cohesive image.
I asked my wife, Valerie, to do the same thing and she was actually even a bit more dramatic.  In the final piece, I thought about the fact that I wanted to comment on her two poses and so I added an additional element to my paintings of her, some paintings in the background.  In “Two Landscapes,” I wanted the landscapes moods in the background to reflect something of the feelings I thought she was communicating in her poses.  I liked the motif of extra images included in the paintings to communicate additional feelings or ideas in the images and I built on this in additional paintings.
In “The Middle Way,” I actually set up a slide projector with a blue slide aimed at the left side of my model Heidi.  In the photos I took, I found that the blue was too intense and so in mixing the colors I toned down the cool blue on the left side of her flesh tones but still included quite a bit of it in the drapery.
Raphael’s painting is an allegorical representation of two basic but opposing philosophical schools of thought.  The two central figures are the keys to unlocking his allegory.  The figure on the left represents Plato, who points heavenward as a symbol of searching for the “ideal” or “platonic” world that is the world of ideas rather than the physical one.  The figure on the right, who gestures downward, is Aristotle who’s philosophy lead him to explore and document the physical world through logic.  I’m no Raphael but I’m trying to learn from him.
Taking a page from much better artists than myself I decided to try out some allegorical themes and so my “half glass” paintings deals with points of view. 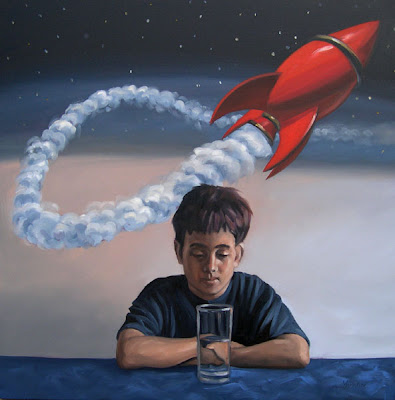 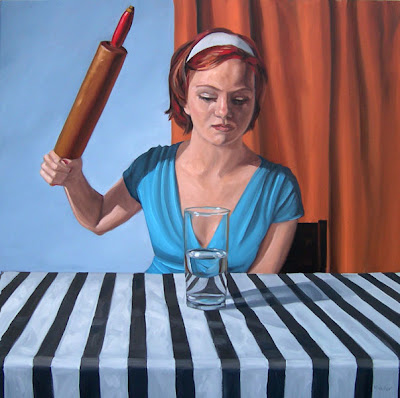 “Polly Anna” is meant to reference the clichés dealing with the 1950’s housewife. (This painting was used on the cover of a book by Hannah Gerber "How to Grow Up."
One of my most recent painting using the “half glass of water” theme is called “Two Schools.”  In “Two Schools” my aim was to incorporate some of the things I had learned about color and integrate it in with some art historical ideas and symbols used in Raphael’s famous painting “The School of Athens.”
I hope this helps some of you guys out there!

Here's a couple of links to more of my "How To" articles about painting.