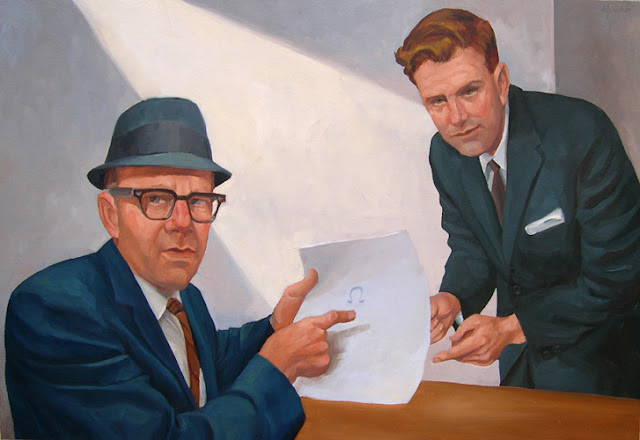 
"Could you come in here for a moment, Stephenson"?

"Of course, Mr. Abbot. I'll be right there.", I replied. Rising up from my chair, I wondered why Mr. Abbot wanted to see me this time. The man had always made me nervous, especially after his last visit to my workstation just days before. "A cluttered desk reflects a cluttered mind. And cluttered minds are not what we need here at United Conglomerated Industries.", he had snapped, staring at me with his steely blue eyes.

"Yes, sir. No, sir." I had replied, quickly removing the framed photograph of Lillian and the "World's Greatest Dad" coffee cup from the desktop.  "You're a jerk, sir.", that's what I wished I had said. But I hadn't.

"Please shut the door behind you.", said Mr. Abbot. As usual, his hair was impeccably combed to the side, and his monogrammed handkerchief was folded with military precision to a sharp square. Mr. Abbot had moved into his own office after being with the company for only 2 years, swiftly rising up the ranks to a Regional Manager position. I still remember the day he took over Bud's job, and how quickly he had cleared out every stick of furniture aside from the desk and chair and painted the walls hospital white. I been summoned into this stark office dozens of times over the past year, and was mildly shocked to see something new: an unidentified man sitting in one of the two folding chairs that had been set up in the room.

"Thank you for joining us." The older man motioned to the chair next to his. As I sat, he leaned forward and I caught a whiff of Aqua Velva and stale cigarettes.

"I, ahem, you're welcome. What can I do for you?", I stammered. My mind raced. Had Mr. Abbot found an error in my last inventory report? Was this visitor from the Head Office, here to fire me? Despite no wrongdoing that I could think of, the penetrating gaze of these two men already had me feeling guilty.

"We're hoping that perhaps you have some insight on this.", Mr. Abbot replied, standing and sliding a piece of paper across his desk towards the stranger.

The man plucked the page from the desktop and held it up to me.
I squinted to make out the light blue symbol drawn neatly in the center of the otherwise blank sheet of typewriter paper. "Ahhhh...what is this? Some sort of game show quiz? What's going on here?"

I nodded my head. "Yes, I know. He was a nice guy. We bowled on the same league for years. You... you don't think I had something to do with his death, do you?"

"No, Stephenson. Don't be absurd. Morry was a dedicated worker, pushed himself hard. Maybe a little too hard, for a man his age. He was just about to unveil a breakthrough new product for the company, but his research was incomplete. When the cleaning staff found him on Tuesday morning, they found this on his desk."

Mr. Abott continued. "It seems as though he was trying to leave a final message for us, and it might be the only clue we have to deciphering his research notes. Now, take a close look at this symbol and tell us what you think it means."

The older man impatiently tapped the paper with his finger.
"Well, obviously it's the symbol for ohm, the unit of measurement for electrical resistance.", I said. "It's also the symbol for the Greek letter omega. One ohm represents the resistance in a circuit when one volt maintains a current of one amp..."

Mr. Abbot slammed his fist down on the desk. "Dammit, Stephenson! That makes no sense! We're a snack cake company, for God's sake!"

"I'm sorry, sir, but I don't know what else to tell you. Morry never spoke to me about his research, and without the rest of his notes as context, I can only guess...", I blurted.

"Enough. Get out, Stephenson. As usual, you're no help at all.", Mr. Abott snapped.

"Sorry, sir. If I think of anything.." I started, then realized that the two men had already forgotten me.

"Perhaps he came up with some sort of electrically charged cookie.. the 'Zapper'!...or maybe cupcakes that make your tongue tingle... ", whispered Mr. Abbot to the older man, who simply sat in his chair nodding.

I closed the door behind me and walked slowly back to my cubicle, pausing for a moment outside Morry's vacant office, wondering what it all meant. None of it made sense, and I realized that I didn't want to end up like Morry: alone and overworked, found dead at my desk. As I turned away, I glanced back to look at Morry's office one final time. The room behind the frosted glass door was dark and silent, but I was comforted by the familiar sight of Morry's cute young secretary still stationed behind her desk, reading a magazine and endlessly brushing her perfectly bobbed red hair.
Posted by Kenney Mencher at 9:00 AM