I'm the cover artist for this book! 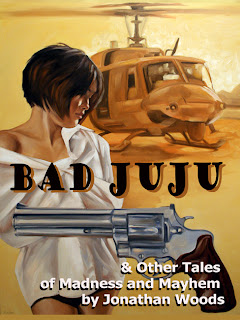 I'm the cover artist for this book!
John Woods is reading from my book of noir crime stories, Bad Juju & Other Tales of Madness and Mayhem at the Cornelia Street Café in NYC on Tuesday, Oct. 19 from 6-7:30 a.m. My co-reader is New York writer Jim Story.


Since its publication in April 2010, Bad Juju has had an amazing run. The editors of New Y...ork Magazine rated Bad Juju as highbrow brilliant in their cultural Approval Matrix for April 26, 2010, calling Bad Juju: “Hallucinatory, hilarious, imaginative noir.” Ben Fountain, 2007 PEN/Hemingway Award-winner, said: “Bad Juju is the product of a truly twisted mind, and I mean that in the nicest way,” while Scott Phillips, author of The Ice Harvest, called Bad Juju “. . . the wildest, funniest, scariest collection of stories I’ve read in a long while.” And Ron Rash, PEN/Faulkner Award-finalist and winner of the Frank O’Conner short story Award bleeped: “[Bad Juju is] not for the faint-hearted.”

Publishers Weekly wrote: “Violence, sex, and gonzo plot twists fuel Woods' diverting collection of 19 stories, most set in sun-and-blood-drenched borderlands. [The stories in Bad Juju] amp up the volume to 11...” Spinetingler Magazine dubbed me “the David Lynch of short crime fiction.” Ken Bruen, master of Celtic noir, quipped: “Woods has arrived fully fledged as a maestro…The writing [in Bad Juju] is of such a high caliber that I found myself reading the stories aloud to get the full flavour of Woods’ artistry.” Jay Parini described the stories in Bad Juju as “dark, often strange, [and] eerily radiant.” “Surreal, bloody, profane and often outrageously funny,” concluded the Howard County Times.

Prior to my New York visit I’ll have the honor of appearing at the 2010 Texas Book Festival with Mark Haskell Smith and Lou Berney.

I hope you can drop by the Cornelia Street Café on Tuesday, Oct. 19 to have a drink and listen to a couple of writers doing their thing. See More